Economic and Social Survey of Asia and the Pacific 1986 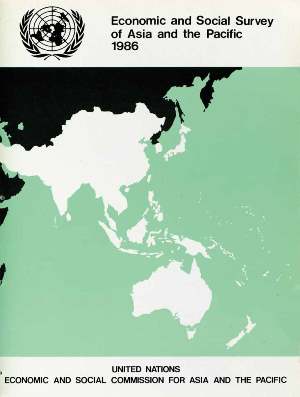 This is the fortieth annual Economic and Social Survey of Asia and the Pacific (until 1974 entitled the Economic Survey of Asia and the Far East). The Survey is divided into two parts, as in previous years. Part one is devoted to a survey of current economic developments in the region in the perspective of events in the world economy. Part two contains a study on human resources development, which is the Commission’s current theme topic.

The deteriorating economic performance in developing Asian and Pacific countries in 1985 turned out to
be deeper and more widespread than indicated by preliminary data reported in last year’s Survey. Generally, declining exports and worsening external balances were mostly responsible for the slow-down in. economic activity, which affected the dynamic economies of East and South-East Asia more sharply than others in the region. However, the continued fall in primary commodity prices, which were at the decade’s lowest ebb in 1985, had an adverse impact in almost all member and associate member countries, especially the least developed and Pacific island economies.

In 1986, changes in the external economic environment caused by the depreciation of the dollar, crumbling oil prices and declining interest rates had mixed effects in this region. These changes have put a premium on economic diversification and on flexibly responding to rapid shifts in the global economy. Most countries in the region continued to face an unfavourable external environment and difficult adjustments, with scarce financial resources, domestic and external, to help them strengthen their economies.

In the past, most developing countries in Asia and the Pacific have tended to pay inadequate attention to the abundant asset of human resources, and it is thus heartening that heightened concern is now being shown to the need to develop this resource. The study in Part two on the Commission’s continuing theme topic of human resources development focuses on three major issues: population, nutrition and health, and education. It examines the potentialities, problems and policies in each broad area and highlights their interrelationships. The study concludes with suggestions for possible regional cooperation in human resources development.

Like previous Surveys, this issue is published on the sole responsibility of the secretariat, and the views expressed herein do not necessarily reflect those of the Governments of the members and associate members of the Commission.