Economic and Social Survey of Asia and the Pacific 1987 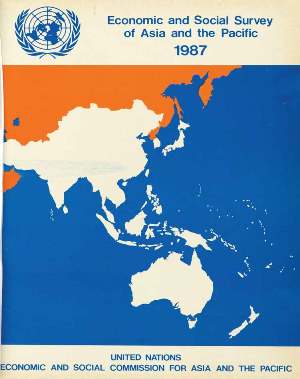 This is the forty-first annual Economic and Social Survey of Asia and the Pacific (until 1974 titled the Economic Survey of Asia and the Far East). The Survey is divided into two parts, as in previous years. Part one presents a survey of current economic and social developments in the region in a global economic context. Part two contains a study on problems of international trade in primary commodities.

Amid increasing uncertainties in the world economy and despite the damaging effects of unfavourable weather, the developing economies of Asia and the Pacific substantially improved their economic performances in 1987. Economic growth reached an enviable average of 6 per cent, or about 2 per cent higher than in 1986. However, this should be viewed in the perspective of the great diversity in performance of the region’s developing economies, with double-digit growth being achieved by China and the newly industrializing economies of East Asia, on the one hand, and stagnation or decline in many least developed and Pacific island countries, on the other.

Two factors had a particularly significant bearing on the region’s 1987 growth performance. One was the sizeable increase in exports of manufactures, especially from countries in East and South-East Asia. The other factor was harsh climatic conditions, mainly the unprecedented drought, the effects of which were widely felt across the region but most severely in South Asia. However, the region today can derive some satisfaction that the vulnerability to capricious weather has been significantly reduced. In India, for example, the unprecedented drought slowed the GDP growth rate, but did not cause famine or a sharp drop in per capita incomes. Nevertheless, the costly drought, plus floods in Bangladesh and eastern India, are likely to cause a considerable set-back to the development efforts of many countries in the region. The region’s growth prospects for 1988 will, however, be considerably weaker, due largely to slower growth in the world economy.

Part two of the Survey deals with the problems of international trade in primary commodities. Despite the increasing role of exports of manufactures, non-fuel primary commodities still provide a major source of employment, exports and incomes in many developing countries of the region. Notwithstanding a limited revival in 1987 in the export earnings of primary commodities, especially metals and minerals, most commodity prices in real
terms remained at a low ebb. The main focus of part two of the Survey is on the structural problems facing the economies in the region that are dependent on primary commodities. It analyses the long-term trends affecting demand and supply in commodity markets, trade patterns and technological changes and their effects on the economies of the region and suggests some policy options emerging from the analysis.

Like previous issues, this Survey is published on the sole responsibility of the secretariat, and the views expressed herein do not necessarily reflect those of the Governments of the members and associate members of the Commission.