Economic and Social Survey of Asia and the Pacific 1988 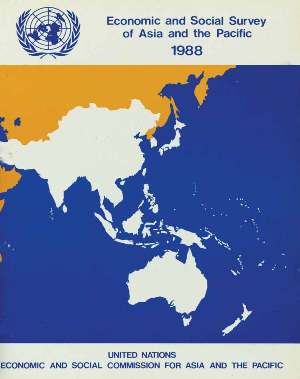 This is the forty-second Economic and Social Survey of Asia and the Pacific (until 1974 entitled Economic Survey of Asia and the Far East). This Survey is devoted exclusively to the analysis of current economic and social developments in the region in a global context. The secretariat has prepared a special study on “Restructuring the developing economies of Asia and the Pacific in the 1990s”, as a background document to the theme topic of the forty-fifth session of the Commission. The study will be published as a separate publication by the secretariat in lieu of part two of the Survey.

The strong performance of the world economy in 1988, belying the fears generated about an imminent recession in the wake of the October 1987 stock market crash, has had its favourable effect on the region’s developing economies. A welcome feature of the improved growth performance is that it has been more balanced and evenly spread across the region than in 1987. However, the continued slower growth of the least developed and Pacific island economies, many of which were battered by severe natural disasters during the last year, remained a major cause for concern.

The fast momentum of Asian and Pacific economic growth has, however, to be seen in perspective. For most of the South-East Asian and South Asian countries their improved economic performance, in 1988, was partly because of the recovery in agricultural production from the drought affected levels of the previous year. The Asian newly industrializing economies and China, while continuing to be the main sources of the region’s reputation for dynamic growth, slowed down in 1988 owing to both domestic and external factors.

Indeed there are some significant strains that are beginning to develop as the region attempts to sustain its growth at the present level. There is the emergence of supply bottle-necks in many countries because of inadequate infrastructure development; environmental degradation such as deforestation, and protectionist reactions in developed market economies to manufactured exports from the region. The neglect of social development in the preoccupation with economic success runs the risk of creating social tensions that could prove disruptive. However, if appropriate policy measures are taken at the national, regional and international levels, these strains could be eased and the developing ESCAP region could continue to advance on a steady growth path. Like previous issues, this Survey is published on the sole responsibility of the secretariat, and the views expressed herein do not necessarily reflect those of the Governments of the members and associate members of the Commission.