Economic and Social Survey of Asia and the Pacific 1990 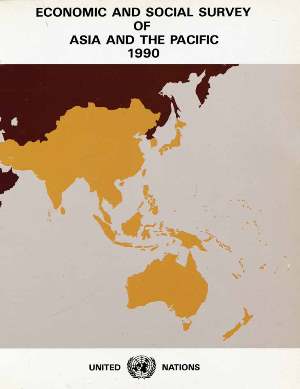 This is the forty-fourth Economic and Social Survey of Asia and the Pacific. As in previous years, it is divided into two parts.

The slow-down in the Asian and Pacific economies that began to be felt in the developing economies of the region in 1989 became more pronounced and widespread in 1990. In most cases the slow-down towards the end of the 1980s stemmed primarily from the hectic pace of growth which many economies had experienced for over a decade. It was reinforced by the weakening of the growth impulses in the world economy, especially trade and
capital inflows.

The international economic environment deteriorated considerably during 1990, notwithstanding the high hopes raised at the beginning of the year in the wake of the dramatic end of the cold war. Towards the end of 1990, the impact of the Persian Gulf crisis was keenly felt by many economies of the region through a sudden rise in oil prices, falling remittances and disruption in exports, especially of tourism, which stemmed from concerns of security related to the outbreak of the war. Another source of considerable dismay to the region’s developing economies was the adjournment, instead of successful conclusion, of the Uruguay Round negotiations at Brussels in December 1990. These events have greatly reinforced the rising apprehensions about a recession in the world economy and its adverse impact on the developing economies of the region. Part one of the Survey discusses in detail these and other current economic developments in the region. It also addresses a number of social issues related to the persistence of poverty and high population growth in many parts of the developing ESCAP region.

Part two of the Survey focuses on development of infrastructure which is of vital importance to the viability of the growth momentum of the developing economies of the region. In the Survey the development of infrastructure is extended to cover not only physical facilities such as electric power stations, roads, bridges and ports, but also social infrastructure, such as that relating to education, health, water and sanitation. The Survey assesses the availability of the services of such infrastructure in relation to the needs, which vary quite substantially among the region’s developing economies. Among the policy questions raised in the Survey, not only investments in and financing of infrastructure facilities, but also issues relating to their management, maintenance and impact on the environment and human resource development, as well as possibilities of regional co-operation, are considered. In the past, infrastructure development was considered to be the sole responsibility of the State, often on the assumption that the private sector lacked both the finances and the incentives to undertake such investments. In today’s changing world not only the private sector but also the non-governmental organizations are being increasingly called upon to share this burden with the government, which, however, continues to have the primary responsibility for infrastructure development. I hope that the issues raised in the Survey will generate a useful policy debate.

Like previous Surveys, which were entitled Economic Survey of Asia and the Far East until 1974, this issue is published on the responsibility of the ESCAP secretariat, and the views expressed herein do not necessarily reflect those of member and associate member Governments.