Economic and Social Survey of Asia and the Pacific 1991 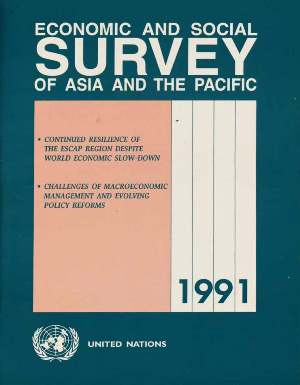 This is the forty-fifth issue of the Economic and Social Survey of Asia and the Pacific. It appears at a time of profound economic and political changes in the world which will have a far-reaching impact on the development of the ESCAP region. The Survey takes note of the momentous changes in the world economy and highlights the need for adequate and prompt adjustments by the economies of the region.

Part one of the Survey reviews in detail the current economic performance of the diverse economies of the region and the contextual issues and policies. Part two of the Survey which, as in the past, is devoted to a study of a topical subject of common concern to the developing countries of the ESCAP region, focuses on the problems of macroeconomic management and reform faced by them in recent years.

The performance of the world economy in 1991 deteriorated significantly with aggregate world output falling for the first time in over a decade. To the continuing slow-down in major industrial countries in 1991 was added a sharp fall in output in the former Soviet Union, while the Eastern European economies did not show the hoped for resilience after undergoing wide-ranging economic reform. At the same time, the hopes for successful conclusion of the Uruguay Round continue to be deferred, endangering the chances of strong growth of the countries of the ESCAP region which have a high stake in it.

However, the lessons of sound macroeconomic management and trade policy reforms which have been largely responsible for the success of most dynamic Asian economies have not been lost on others. The current wave of macroeconomic reforms sweeping the entire developing ESCAP region, especially those in transition from centralized planning, is in part the assertion of a strong will on the part of the weaker economies of the region to catch up with the more dynamic ones. Despite significant differences in the underlying imperatives and impulses, the trend towards greater economic liberalization, openness and deregulation seems to have become universal. However, the path to successful economic reform and the creation of a viable institutional base for sustainable macroeconomic management is paved with uncertainty, short-term set-backs and considerable social costs. The Survey stresses the need for perseverance in the long-term goals of reform with due concern for the most vulnerable groups affected during the period of transition to a more resilient, efficient and internationally competitive economy.

Like previous Surveys, this issue is published on the responsibility of the ESCAP secretariat and the views expressed do not necessarily reflect those of member and associate member Governments.