Economic Survey of Asia and the Far East 1951 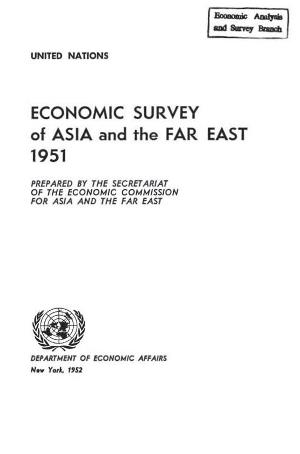 The present Survey deals with economic developments in the year 1951. Part I covers production of foodstuffs, raw materials, fuel and power and manufactured goods; part II deals with international trade and balances of payments; part III with money, finance and prices.

The term “ECAFE region” covers the following countries: Brunei, Burma, Cambodia, Ceylon, China, Hong Kong, India, Indonesia, Japan, Korea, Laos, Federation of Malaya, Nepal, North Borneo, Pakistan, Philippines, Sarawak, Singapore, Thailand and Vietnam. It should be noted that, in June 1952, the Economic and Social Council adopted a recommendation by the Economic Commission for Asia and the Far East to bring Japan within the Commission’s geographic scope, and pursuant to the ECAFE resolution, Japan became an associate member of the Commission. In this Survey, therefore, Japan is included in the “ECAFE region”, and the distinction made in previous surveys between the ECAFE region and the “AFE region” is dropped.

Of the 129 statistical tables, 57 are relegated to the appendix at the end of the text with a view to facilitating presentation. In order to ensure comparability, data compiled by the United Nations Statistical Office have been used wherever possible; additional sources were materials supplied by governments directly to the ECAFE secretariat, information from official publications in various countries, as well as data from publications of the specialized agencies and international commodity study groups. In regard to the economic situation on the mainland of China, the information has been based largely upon such data and evidence as are available from published sources, including newspapers and periodicals.

The Survey, the fifth in a series of annual economic reports, has been prepared by the Research and Statistics Division, with the assistance of other divisions, of the ECAFE secretariat. Acknowledgments are due for the assistance rendered by the Food and Agriculture Organization and other specialized agencies, as well as by the United Nations Department of Economic Affairs at Headquarters.