Economic Survey of Asia and the Far East 1962 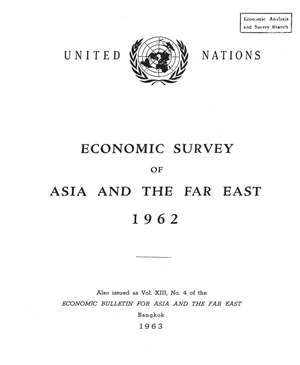 The present Survey is the sixteenth in a series of reports prepared annually by the secretariat of the Economic Commission for Asia and the Far East. A major object of these Surveys, and of the quarterly Economic Bulletins which supplement them, is the analysis of recent economic developments in, and affecting, the countries of Asia and the Far East in so far as these developments are shaped by, and help to determine, their policies.

The Survey is published solely on the responsibility of the secretariat, and the views expressed therein should not be attributed to the Commission or its member governments.