Economic Survey of Asia and the Far East 1963 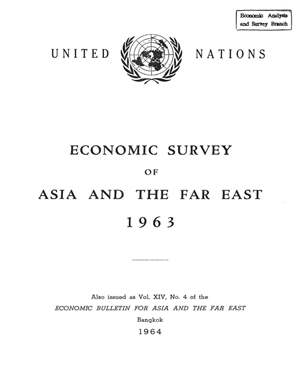 The present Survey is the seventeenth in a series of reports prepared annually by the secretariat of the Economic Commission for Asia and the Far East. A major object of these Surveys, and of the quarterly Economic Bulletins which supplement them, is the analysis of recent economic developments in, and affecting, the countries of Asia and the Far East in so fa r as these developments are shaped by, and help to determine, their policies.

It has been the established practice since 1957 to examine in the annual ECAFE Surveys a specific aspect of the economies of the region, in order to study long-term trends and their implications for national policies. The present report provides in Part One a series of five chapters forming a study on import substitution and export diversification in ECAFE countries, followed by Part Tw o consisting of three chapters in which the economic developments in the EC A FE region in 1963 are reviewed on the basis of information available to the secretariat up to the time the Survey was written (January 1964).

A resolution of the Economic and Social Council at its 32nd session in 1961 extended the geographical scope of the region to include Mongolia and another resolution at its 36th session in 1963 extended it to include Australia, New Zealand and Western Samoa. The present Survey includes these countries to the extent that information is available.

The Survey is published solely on the responsibility of the secretariat and the views expressed in it should not be attributed to the Commission or its member governments.