Economic Survey of Asia and the Far East 1972 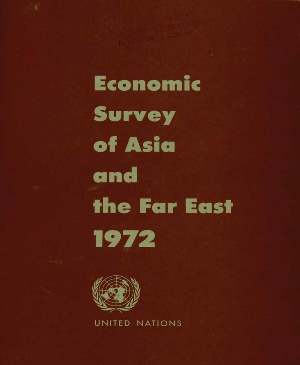 The present Survey is the twenty-sixth in a series of reports prepared annually by the secretariat of the Economic Commission for Asia and the Far East. A major object of these Surveys, and the quarterly Economic Bulletin, is the analysis of recent economic developments in the countries of Asia and the Far East, and of international developments that affect them. Particular attention is paid to the analysis of economic policy and policy issues.

Since 1957, in addition to review and analysis of developments in individual countries of the region, it has been the practice of these annual Surveys to examine specific problems concerning the economies of the region in order to study long-term trends and their implications for national policies.

The International Development Strategy for the Second United Nations Development Decade lays down the goals and objectives for the Decade and emphasizes the need for appropriate arrangements for evaluating the progress. Part One of the present Survey contains the First Biennial Review of Social and Economic Developments in ECAFE Developing Countries during the Second United Nations Development Decade. This Biennial Review, which was intended as a contribution towards the 1973 global biennial review, has identified some basic problems facing the region, such as unemployment and mass poverty, low levels of productivity, stagnation in fixed capital formation, low level of domestic savings and the decline in net transfers of external resources to ECAFE developing countries, etc. Part Two contains current economic surveys of twenty-seven countries of the region.

The Survey is published on the sole responsibility of the ECAFE secretariat; the views expressed should not be attributed to the Commission or to the Governments of member countries.