Economic and Social Survey of Asia and the Pacific 2007

Economic and Social Survey of Asia and the Pacific 2007 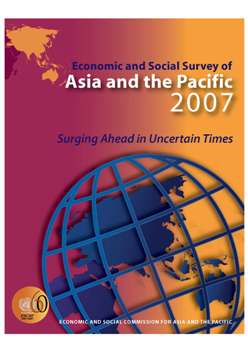 Developing economies in the Asia-Pacific region grew at 7.9% in 2006, up from 7.6% in 2005. The continuing buoyancy of external demand remained a source of growth for many countries. Exports of electronics continued to be a key source of growth, while oil and gas exports remained strong in the Islamic Republic of Iran and the oil and gas exporters of North and Central Asia, and South-East Asia. Domestic demand drove gross domestic product (GDP) growth in South and South-West Asia, particularly on the back of high investments.

The region's impressive economic performance was against the backdrop of a riskier global environment. Oil prices hit a record high in the middle of 2006, while stock markets plummeted across the Asia-Pacific region, raising fears of a downturn. Global imbalances steadily widened, with the current account balance of the United States of America deteriorating by a further $100 billion in 2006, increasing the possibility of an abrupt depreciation of the United States dollar. The sharp appreciation of major currencies in the region against the United States dollar made it difficult to keep exchange rates competitive while addressing inflationary pressure. The suspension of the Doha Development Round in July 2006 did not bode well for a region driven by trade and ready to gain from further liberalization.

Despite high and volatile oil prices in 2006, developing economies in the Asia-Pacific region kept inflation under control at 4.3%, similar to that of the previous year. Asian currencies were strong, reflecting larger-than-expected current account surpluses and capital flows, including those for speculative purposes. Developing countries in the region continued to add to their sizeable foreign exchange reserves, which had reached an unprecedented $2.5 trillion at the end of 2006. The large increase in reserves points to continuing efforts to push down the region's currencies by official intervention. Current account balances deteriorated across the region in 2006, mainly a result of rising oil imports. Strong exports in many countries offset some of the effects of rising oil prices. The region's exports grew at an impressive 18%, benefiting from healthy global demand.